Ballet is a volatile mix of fragile beauty and formidable athleticism. Nowhere is this more apparent than in the leaps. Leaps and jumps are often misnamed and merged in choreography, but there is a key difference: Leaps involve traveling, movement across the stage. Jumps are vertical, beginning and ending at the same point. There are only a few genuine leaps, but they are attention-grabbers.

Up, Up and Away

The jetés have it for sheer impressiveness, simultaneously soaring skyward and covering great distances across the stage. But leaps are show-off stuff, typically reserved for soloists or principals who explode or glide in a blur of perfectly placed arms, legs and head that rivets the audience's attention. The women are fierce or fairytale birds, and exuberant or desperate romantic heroines. And male ballet dancers deliver their own breathtaking star turns with bravura barrel turns.

This is the Big Kahuna, a full traveling split in mid-air. The legs are completely extended, toes pointed, and the split is widest at the height of the arc. Dancers get into that split as quickly as possible and hold it as long as possible, breathing in as the legs are fully extended to increase the height and the appearance of flying. 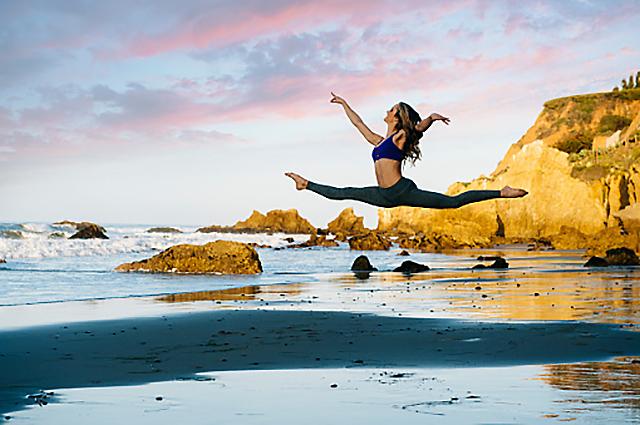 Adding a twist, literally, turns a grand jeté into a smaller leap that reverses the orientation of the dancer. The movement involves a turn, a brush-through to the extension of one leg, and then another turn, or fouetté, as both extended legs meet in the air. The dancer lands on the leading leg with the trailing leg extended in arabesque. Tour jetés may be executed singly or consecutively.

A cabriole may be executed as a jump, but it typically involves some travel through the air so may also qualify as a leap. After a plié, the extended working leg is thrust up and out, the supporting leg follows, and beats against the working leg, sending it higher as the dancer's body follows the legs. The landing happens on the supporting leg. There are several variations of cabriole; look for male dancers to reach a 90-degree angle with the up-thrust leg, and to travel noticeably in mid-flight. 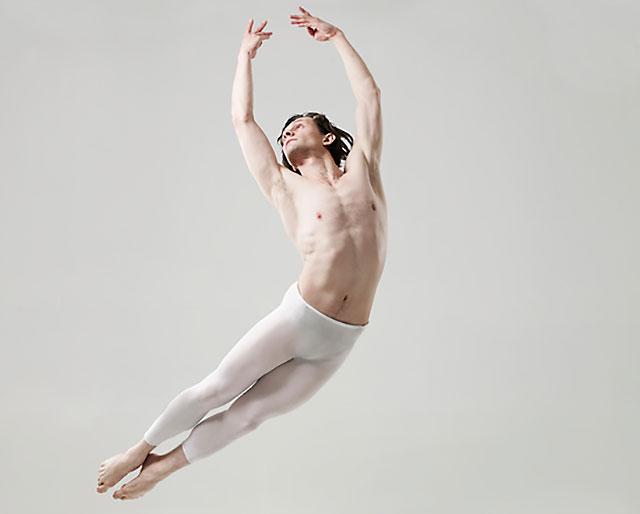 Another great move male dancers power through and ballerinas float through, the switch leap launches the dancer up and forward into a split in which the extended legs switch places in mid-leap. Done correctly, switch leaps are both graceful and gasp-worthy. Danseur Jorge Barani pulls out all the stops in Le Corsaire with grand jetés, switch leaps, and barrel turns.

Barrels have made the careers of male dancers who travel around the entire stage in an impossibly controlled series of low-torso, arms extended leaps. The basic move bends the torso over an imaginary "barrel" as the leading knee pulls the body up and over into a traveling turn in the air. Masters like Baryshnikov execute a series of barrels with the leading leg extended, but it serves the same function -- to lead the body around and forward. Barrels are showstoppers.

The footwork eclipses the modest leap in a "step of the cat." The dancer hops sideways, bending the knees to bring the legs up high in a diamond shape before touching down a little ways from the start of the leap. Watch for a tour de force of pas de chat in Swan Lake when the cignets link arms and do sixteen pas de chat in a row.

Firebird is one of those fancy jumps that make great still photos and may move the dancer slightly from an up-down vertical. So it has the name "leap," even if it isn't fully earned. But the back leg brushing back into attitude -- foot pointed, knee bent, leg raised in a forceful beautiful arc -- and the exaggerated backbend of the torso are gorgeous. And you'll need it if you want to dance Stravinsky's The Firebird.

Improve your leaps and inhabit the heights with targeted practice, careful workouts and a few simple adjustments that could make that extra inch -- or six -- a snap. Breathtaking leaps are no accident. They require dedication and discipline as well as daring.

You don't have to be Nijinsky or a Plisetskaya to wow an audience with your spectacular leaps. Even if you aren't gifted with a body that is more at home in the air than on the ground, you can improve the arc and distance of your airborne choreography significantly through repetition and mental focus. And, if you are an appreciative member of the audience, understanding the complexity and challenge of executing a thrilling leap makes a ballet performance a deeper and richer experience.