In the 1970s South Bronx, New York City, breaking broke out in the streets as warring gangs took to battling each other with aggressive, percussive dance. It's all mainstream today, but breakdancing was a test of toughness and talent then, and those roots still give it its edge.

The Lowdown on Breakdance

Taylor Swift's back-up dancers do it. So You Think You Can Dance does it. Subway performers do it, in the tunnels and on the trains. Breakdancing, the look-at-me and in-ya-face feats of acrobatics and high-risk-in-motion that can take your breath away with its sheer audacity, is everywhere now. B-boys and B-girls of every ethnicity are hip-hopping in clubs and flash mobs, at parties, and on Broadway. But it wasn't always like this. 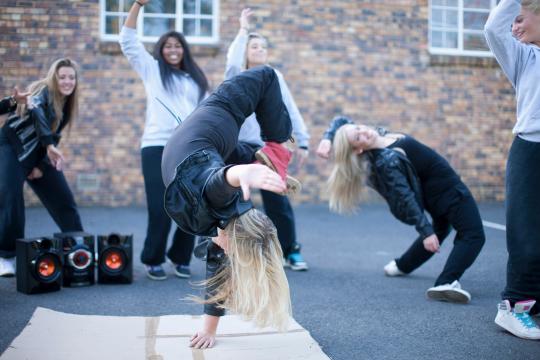 In 1969, James Brown released Get On the Good Foot and the punchy music, strong beat, and Brown's moves on the concert stage were an instant hit. Kids copied the funky dancing and added their own spin to it. In the Bronx, it was called B-boying or breaking and by the early '70s, rival street gangs evolved into rival dance combatants who faced off with their fanciest, most confrontational moves.

As the '60s slid into the '70s, NYC DJ Kool Herc invented a style in which the percussive portions of music tracks were isolated and repeated, creating a dynamic "break" that heightened tension and inspired the frenzied dance patterns. B-boys showed their stuff in these breaks -- the more spectacular the better. This breaking pattern is common in Afro-Caribbean music; breakdancing and hip hop both owe a major debt to the impact of African tribal dance on Caribbean cultures. The Bronx immigrants from Puerto Rico, Cuba, and other mixed-race Latino countries embraced the familiar beats and added their own interpretation. That mix included influences from capoeira, kung fu, gymnastics, tap -- anything battle-worthy, rhythmic, and percussive.

By 1983, with breaking on the East Coast and popping and locking on the West Coast, the B-boys were off the street and no longer news. Then the film Flashdance featured a scene with the well-known B-boys, Rock Steady Crew and a breaker named Wayne "Frosty Freeze" Frost, and the game was on. Breakdancing was back, and it never left.

There are no gangs innovating power moves instead of knife fights these days. But breaking has staying power. It's awesome. It's athletic. It's cooler than you -- unless your headspin rivals your moonwalk, and your footwork is too fast to track.

Michael Jackson didn't invent breakdancing, but he embraced it and advanced it with his concert dance breaks, music videos, and the legendary moonwalk. Jackson perfected his smooth move choreography and revolutionized music video and live concert dance performance. In numbers like Billie Jean and Smooth Criminal, the moonwalker brought some daft footwork.

BBoy Junior has superhuman arm strength, and that's no accident. Junior had polio as a child and still walks with a limp. He taught himself to nail spectacular power moves and freezes, and he wows audiences at breakdancing competitions as he "floats" in the air.

BBoy Crazy Legs is a founding member of Rock Steady Crew. Crazy Legs has been defining and redefining breakdance since 1979. He's an original legend who is passing along the break dancing tradition to a new generation of power movers.

Battles of the best are where you find a lot of big names in world competitive breakdancing, no more local street fighting. Competitions are big business now, and you can watch the mythical heroes and the current contenders -- names like The End, Taisuke, and Issei - bringing it to roaring crowds in televised arenas. Here's BBoy Issei, a Japanese favorite who's been breakdancing since kindergarten, in the Red Bull BC One World Final 2017, battling BBoy Willy.

Breaking is not strictly a male phenomenon, although boys do dominate the competitions. Breakdance's history as a nonviolent option for dueling street gangs doubtless has something to do with that. However, girls can give as good as their male counterparts in the tough gymnastic display. Some B-boy groups are mixed, with female members. There are some all-girl crews. And back-up dancers are as likely to feature girls as boys -- whoever can handle it gets the spotlight.

There are four elements in a breakdance, and you can pick them out when competitors face-off in a flash mob street battle, in performance, or in competition.

Breaking With the Bard

Breakdancing doesn't have a long history, but it is developing a long reach. Catch some classic breaking at the Union Square or Times Square subway stations on your next visit to the Big Apple. Performers in the subways are allowed once they are vetted and assigned a location. (B-boys on the trains is a different story.) Or, since all the world's a stage, you may find your breakdancing fix on the boards, juicing up a little Shakespeare. In August 2017, the Greater Hartford Arts Council in Connecticut presented Breakdancing Shakespeare: As You Like It. And why not? Shakespeare enjoyed a little street swagger. He might have come up with the idea himself for those brawls between the Montagues and the Capulets. Someone inventive may do it yet.