The CanCan dance is a familiar sight to many people, not only from its popularity on the stage but also in movies such as Moulin Rouge. It's challenging for the dancer and entertaining for the audience, but the dance has changed a lot over the centuries.

History of the CanCan

What dancers now call the CanCan has its roots in one of the favorite social dances of the 19th century, the quadrille. The final figure of the group dance would feature the dancers performing high kicks and extravagant gestures with their arms. Originating in Paris, the moves may have been inspired by a popular dancer and entertainer named Charles Mazurier. Mazurier was very athletic and able to perform jump splits with ease. The CanCan dance (which literally means scandal in French) became a scandalous way for female dancers to show off their legs and kick up their skirts. The dance also offered the opportunity for male dancers to show off their own virility and prowess.

As with many popular, somewhat risqué dances before and after the CanCan, there were attempts to repress the dancers. The authorities went so far as to arrest enthusiastic kickers, but the dance never quite reached the point of being banned in Paris. Instead, it moved onto the stage where performers began refining and taking the basic moves further into the realm of dance virtuosity.

Both men and women performed the dance. In fact, an all-male CanCan dance troupe was formed in 1870 called Quadrille des Clodoches. The real stars, however, were the women, who would dance solo CanCan routines on stages such as the famous Moulin Rouge. Jane Avril and La Goulue were stars of this age, and they were immortalized by the painters Toulouse Lautrec, Georges Seurat, and Picasso, among others.

CanCan Comes to Britain and the U.S.. 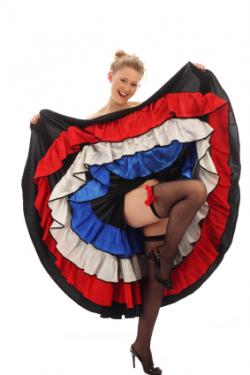 When the dance moved across the channel and overseas at the turn of the century, solo performers were replaced by lines of dancers dressed in large colorful skirts, petticoats, and black stockings. The dance was sort of like the rock and roll of its time, considered scandalous at worst and not fit for the gentille folk at best.

The extravagant choreography was still the core of the dance, with the dancers performing moves such as grandes battements (high kicks) or ronde de jambe (a term familiar to ballet aficionados). They also used the costumes much more as part of the dance, twirling their skirts and petticoats in complicated and wild patterns.

In the early 20th century, as the dance became associated with bars, saloons, and other locations of ill repute, some dancers would titillate their audiences by not wearing any undergarments except for the black stockings. They would finish their dances with skirts flipped up over their backs to the enthusiastic applause of the audience.

The Music of the CanCan

There are several music pieces associated with the CanCan dance, many of which are featured in musicals and films. Some of the more recognizable pieces include:

The moves of the CanCan are also staple choreography for several ballets that are still performed. These include Massine's La Boutique Fantastique and Gaîté Parisienne. There's also a CanCan in Act III of The Merry Widow.

In one of the dance's most modern incarnations, the choreography for the movie Moulin Rouge combined elements of salsa, modern, and even hip-hop (along with music from Madonna and Kurt Cobain) in its portrayal of the CanCan.

The video below shows the CanCan is still being presented to audiences around the world.

A Dance That Endures

Between visual art, music, and the sheer joy of the moves, the CanCan dance has become firmly entrenched in the Western arts canon. The simple exuberance of couples dancing the quadrille has spawned a body of work that has been enjoyed by millions.