Take "B" for Bombay, the old British name for the capital of India, and "Hollywood," for the center of the film universe, and merge them to get Bollywood, an exuberant mash-up of cinema and classic Indian culture that is its own unique movie experience. The hand gestures in the mesmerizing dance routines in the films are really a specific element of the storytelling.

There are two types of hand gestures: single (asamayukta hastas) and double (samyuta hastas). They are staples of classical dance and are described in traditional Sanskrit poetry, such as the Abhinaya Darpana of Nandikeshvara. The mudra names are not necessarily the same as the meanings ascribed to the gestures, but every hasta has a meaning. The choreography blends hand, foot, and body movement to either embellish the story or carry on a conversation between the dancers. According to Love Bollywood, an English fan site, there are twenty-three double hand gestures and thirty-two single hand gestures, a wide and versatile vocabulary for choreographers.

For example, in the movie Kabhi Kushi Kabhie Gham, one of the dancers waves her hand over the bride's head, turns her hand into a fist, and presses her knuckles into the side of her own head. The translation of this action is: this bride is so beautiful, and her wedding so wonderful, that it's certain to bring down the evil spirits ("evil eye", jealousy, etc). The dancer is warding them off and taking the ill will onto her own head. That's a lot of meaning put into only two gestures.

A serious study of the more than fifty mudras or hastas used in Bollywood films would take years. However, you can learn a few of the staples and, with a little practice, merge them gracefully together. To use Indian hand gestures in cinematic choreography, kick your shoes off and take a Bollywood dance class where the tricky collaboration of feet, body, hands, and head are put together for you.

This gesture is the lethal hooded cobra. Spice up your dance with the wrist broken, hand pointed up, all fingers, including the thumb, curved at the first joint (harder than it looks). This may refer to the naga, or snake, but it also indicates arati, the sacred ceremony of waving the lights. 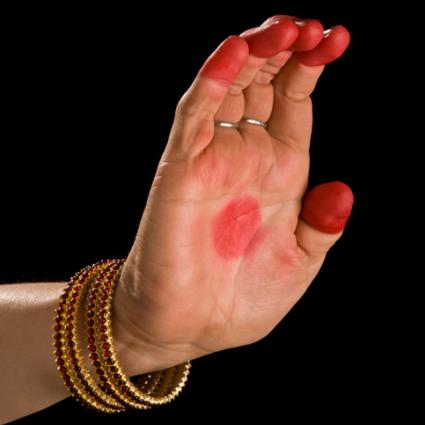 Sikhara means "peak." To form the gesture, close your fingers into a fist with the thumb strongly extended upward. Sikhara means holding the bow (of war or of love, like Cupid), as well as pouring water in the Shiva cleansing ritual. 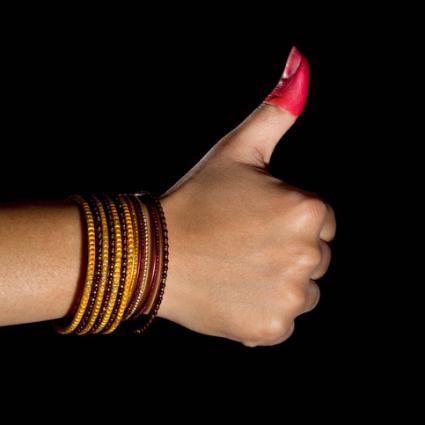 Chandrakala (crescent moon) simply requires extending the forefinger while the hand is in Peak position. Chandrakala refers to moon-crested Shiva (Lord of the Dance) or to the tusks of an elephant or boar.

Mayura, the peacock, stands for the magnificent bird (particularly its beak) but also means ritual, a marriage thread, tossing flowers on the sacred symbol of the lingam, and contemplation or meditation. Create a peacock by touching the tips of your ring fingers and thumbs together and keeping the remaining fingers straight. Or use the alternative - hold your hands up, palms facing forward, fingers pointing up and together. Roll your index fingers over your thumbs and spread the rest of the fingers apart with the pinkies highest. Point your hands together at chest height, relax your wrists and elbows and you've formed the graceful peacock. 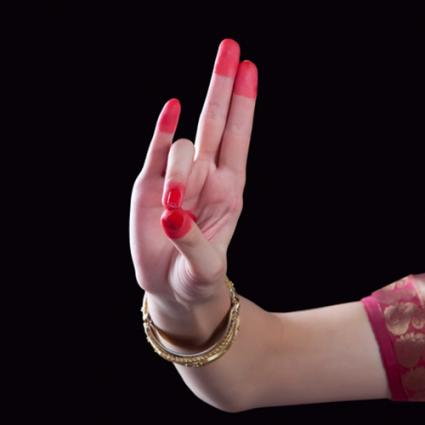 Alapadma is lotus, a strong symbol of enlightenment, joy, beauty and the sacred lotus flower. Creat a double Lotus by opening both hands flat, palms up, fingers slightly spread. Bring your pinky fingers in toward your body and stretch your other fingers out and wide. Really work it to get the shape of the flower. If you bring both wrists to meet, your hands form a full-blown lotus, but these mudras can be separated in the dance as well. 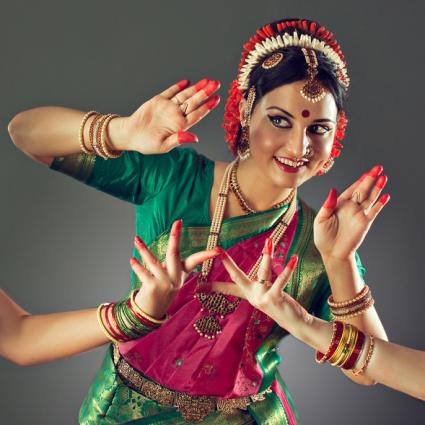 Bhramara is bee. This gesture has many meanings: a bee, a crane or another flying creature, a vow of silence, picking flowers or reassurance. Form it by pressing the thumbs and middle fingers together and curving the index fingers into the resulting space. Raise the remaining two fingers (ring and pinky) as high as you can and keep them separated.

Talk With Your Hands

Hand gestures in Indian dance (and yoga) are called mudras. They come from sacred ritual in which every movement is carefully choreographed and symbolic. The mudras in Bollywood's show-stopping dance numbers are ancient temple rituals, although today those dances bear little resemblance to the formal worship of the temple rites. Choreography in modern Hindi films borrows from hip-hop, salsa, ballet, music videos, and western pop moves in general, grounded in the conventions of Indian classical dance. Hand gestures often take a back seat to pelvic isolations, but they are always incorporated. Mudras add to the specific Indian flavor of the films and they are there to enhance the story. If you can read them, you may find nuances you would have missed. If you are learning Bollywood dance, you may find the hand gestures are not as simple as they look.

In the Hindu faith, Lord Shiva appears in his aspect of dancing the cosmos into dissolution and recreation, the Shiva Nataraj. The sacred symbol is the inspiration for all classical Indian dancing and has readily transformed into the distinctive mudras that flavor Bollywood dance. What appears to be simple popular entertainment in Indian cinema has a level of complexity due to its classical origins. By learning some of the mudras, you can interpret your favorite Bollywood tearjerker or romantic comedy in a whole new light.