In addition to some exciting performances, Dancing With The Stars showcases some amazing dance costumes. Each week brings new outfits that many viewers would love to own.

During season 21, singer-songwriter Andy Grammer teamed up with pro dancer Allison Holker. Performing the Quickstep to American Bandstand they wore these fun costumes in a whimsical nod to the 50s. Allison's bright fuchsia rockabilly-style dress featured a teal trimmed petticoat that added both volume and movement.

Find an equally whimsical variation of Allison's dress in a blue and white number from Revamp for about $200, or an adorable patterned version with boatneck design, ranging from $20-50 based on fabric choice, by Maggie Tang. Combine these full A-line styles with voluminous petticoats to create a wave of action from the hips down. The broad width of the skirt bottoms fill up the space with energy and motion.

Season 21 winner Bindi Irwin and her partner Derek Hough were all smiles with their newly awarded Mirror Ball Trophies in hand. Bindi's sleek black dress had a lovely off-the-shoulder decolletage and asymmetrical hemline that added to her natural sparkle. She and Derek performed a fusion of Argentine Tango and the Cha Cha to Timeflies' All the Way in these outfits.

If Bindi's dress catches your eye, there are two good options that are ready for the dance floor. The first mimics the beautiful neckline of her dress offering a sophisticated look , for under $30 from Tiksawon. This one has a long, narrow skirt, but the material offers some stretch for ease of movement. The other option is a sexy one-sleeved number with an asymmetrical hemline from Venus for under $20. The asymmetry will draw attention to and flatter your legs, perfect for Latin-inspired dancing.

Switching partners in Season 21, Bindi burned up the floor with Val Chmerkovskiy doing the Cha Cha to Jess Gynne's Hold My Hand. Her bright yellow rhinestone and sequined bodice with a skirt of yellow ostrich feathers was a perfect match to the energy the duo exhibited throughout the dance.

Get your own Cha Cha happening with one of these feathered numbers. A golden sequin corset and matching yellow to red feathered skirt from CHARISMATICO is priced at about $210. If you want to go for something a bit wilder, brighter and insanely expensive with a fully feathered dress, Browns carries a yellow strapless number for around $4,000. The soft feathers will move independently, drawing focus to the hips.

Season 21, week 9, found Bindi and Derek doing the Viennese Waltz to Roses and Violets by Alexander Jean, scoring a perfect 30. Bindi's sweeping dusty rose gown billowed throughout the waltz adding a sense of romance to the stunning piece.

Elegance is the watchword for a gown with the same sensibilities. Look effortless in this chiffon dress with embellished bodice for about $200 from PROMGIRL, or try a dramatic chiffon lace evening gown for about $200 from JJ's House. On both dresses, the skirting will float gently through any movement.

Food celebrity and cookbook author Paula Deen danced the Tango to The Temptations' Get Ready with partner Louis Van Amstel in season 21 of the competition. Paula wore a stunning red dress with sequins and a feathered epaulet.

If you are stepping out to paint the town red one of these designs will fit the bill. A beautiful chiffon ankle-length dress with stunning lace bodice from Roiii and available from Amazon for under $40. The full cut of this dress allows the fabric to swirl and drape through dance movements, particularly effective when a momentary pause is taken during the choreography.

In the season 21 finale, singer Nick Carter and pro partner Sharna Burgess performed a Salsa/Tango fusion number. Dancing to Turn Up the Music by Chris Brown, Sharna's gorgeous red applique lace bodice and tear-away skirt allowed them to ramp up their choreography with complete ease of movement.

A shorter version with a similar shrug style and short sleeves comes from Amazon for under $30. If you prefer a longer dress, this style from Sophisticated Lady mimics the neckline and features plenty of sparkle for about $430. The long skirt offers a slit on the side so you'll have plenty of freedom to Salsa and Tango.

Actress Elizabeth Berkley danced the Argentine Tango to Symphony 6: Fare Thee Well & the Requiem Mix by Emily Wells with her pro partner Val Chmerkovskiy. Elizabeth's dress is a chiffon skirt cut with asymmetrical layers attached to a black matte lycra bodice with nude sequined cutouts. Its movement is designed for highly dramatic effect which syncs with the drama of the dance itself.

Try a longer version of this dress from Forever 21 for just around $45 which features a high scoop neckline with cutout details on the side and a slit that makes it extremely danceable and effective for the tango. This short version with sequin embellishment, available at Revolve for about $190, has swing in the skirt that will make for quick, tight movement accentuating the hips.

For a similar effect, try this black variation from Revolve for under $200. It features a fitted sheath that is perfect for a dancing, with a leg slit to allow for easy movement. 6pm offers a vintage-inspired version, with unique detail in the bodice for around $40. The stretchy knit fabric makes it an excellent choice for the Rumba. Dress things up with opera-length gloves and a red garter to complete this fun and flirty look.

Also in season 17, actor Brant Daugherty was partnered with professional dancer Peta Murgatroyd. Performing a Salsa to Shake Señora by Pitbull, Peta wore a spangled fringe bra top with straps that criss-crossed her body. This was paired with a tulip-ruffled skirt of hot pink and purple, creating additional movement and energy for the dance.

To achieve Peta's look, try a dress featuring cut outs and a tulip ruffle from Charismatico, priced at about $165. This competition-style dress will allow for free motion from the torso and place emphasis on the hips and legs for the Salsa. For a similar style with more coverage, try this sequin fuchsia rumba dress from Discount Dress Shop for around $270. The ruffled organza skirt provides plenty of motion.

Dancing the Samba to José Norman's rendition of Cuban Pete, comedian Bill Engvall took his partner Emma Slater, hip-shaking and shoulder-shimmying across the stage in season 17. Clad in peacock blue, Emma wore a rhinestone-studded, long-sleeved, modest cut leotard with a giant feathered bustle. With the prominent hip action attributed to the Samba, it added a little something extra to each bump.

To replicate the fun and energy of Emma's costume, one adorable option is this romper with a V neckline, soft flowing long sleeves and short skirt from MayKool for about $25. Or try this romper in royal blue from Lulu's for just over $50. You can pick up a feather bustle in almost any color and style from Etsy to complete the outfit.

Bill and Emma danced the Jive to Elton John's Crocodile Rock in season 17. Emma wore a lemon yellow, sequined, romper-styled leotard with side cutouts, bra back, and short skirt ruffles highlighting the swinging footwork of the choreography.

Capture this fun look with a charming little dress which features plenty of ruffles, available at Light in the Box for around $40. The ruffles on this skirt, being slightly longer and fuller, will bounce and swing with a more pronounced movement. This costume is form fitting, allowing for all the body movements to stand out.

Nicole "Snooki" Polizzi of MTV's Jersey Shore and partner Sasha Farber appeared in season 17. The pair performed the Rumba to Just Give Me a Reason by P!nk. The smooth, seductive rhythm was perfect for Snooki's lace overlay leotard that was draped with white chiffon.

Achieve Snooki's sexy look with a spaghetti-strap black lace playsuit with scalloped details from Missguided for about $50. If you want the same illusion but prefer a little more coverage, try something with a vintage-lace feel and bell sleeves from Nordstrom's for just under $70. Add a length of white chiffon to mimic Snooki's outfit.

Actress Leah Remini stepped up with Tony Dovolani in season 17. Wearing a gorgeous ruffled fuchsia costume featuring a spangled long-sleeved bodice with unique asymmetrical wrap, the couple did the Samba to María performed by Ricky Martin.

To capture the movement of this great dress consider this velvet and chinlon dress with tulip ruffle for about $120. Another variation is this dress with twisted bodice detail and subdued ruffled skirt for around $150. Both of these dresses will deliver great movement from the skirting while retaining a sleek line for the upper torso.

Snooki and Sasha performed the Cha Cha to Wild Ones by Flo Rida. Snooki's costume was extravagantly beaded and fringed, reminiscent of the 1920's flapper scene, which provided added movement and interest during the number.

To replicate this costume, step into a sassy little flapper-style dress with art déco beading that will glisten while the soft petal-reminiscent skirt gives the dance some additional movement at the hemline. Find this option at Unique vintage for around $88. For a bit more of a modern take try this banded version in fuchsia with double fringed bottom, from Venus for just over $70. The longer fringe will add a heavy swinging action to the hemline, bringing attention to the movement of the legs and feet.

Amber Riley from Glee went on to win the Mirror Ball Trophy with partner Derek Hough in season 17. In her first performance Amber wore this champagne-colored, form-fitting, fully beaded costume with an asymmetrical fringed bottom. The fringe provided additional movement to the Cha Cha the couple danced to Little Mix's Wings.

If you want something glitzy like Amber's dress that's a throwback to the Gatsby era, consider a flapper-style dress with dimensional floral appliques and the asymmetrical fringe that give a shimmy to even the slightest of movements. Available at Amazon from about $15-30 based on color choice. For a more modern version with just as much pop, try this 3/4 sleeve beaded cocktail dress from Dillard's for under $200. The fabric has just enough give for the Cha Cha.

Elizabeth Berkley Lauren and Val Chmerkovskiy started out season 17 with a contemporary dance to John Lennon's Imagine. Elizabeth wore a spaghetti strap dress that contoured to her body, opening into a high-low gathered skirt which added both softness and volume at the bottom, a perfect choice for this performance style.

Try one of these lovely versions of this dress that will move as dreamily as the one Elizabeth wore. This dress with high-low hemline from Lulu's for about $55 offers fluidity from the layered chiffon skirt ideal for contemporary dance.

Cha Cha With Bill and Tyne

Bill Nye the Science Guy and his professional partner, Tyne Stecklein, started things off in season 17 with a Cha Cha to Weird Science by Oingo Boingo. Tyne's fringed bodice created interest while the pink ostrich feather detail on the bustle accented the subtle hip work in the dance.

If the fringe factor is appealing, this great little dress has a unique fringe bodice and skirt. Available at Charismatico for about $165, the movements of the upper body will be echoed by the heavy fringe, while the ruffle detail adds some lightness and lift around the hip and thigh.

Dancing With the Stars not only has celebrities partnered with talented professional dancers, it also has some of the most amazing dance costuming around. Be inspired by these looks and step out on the dance floor in unique style. 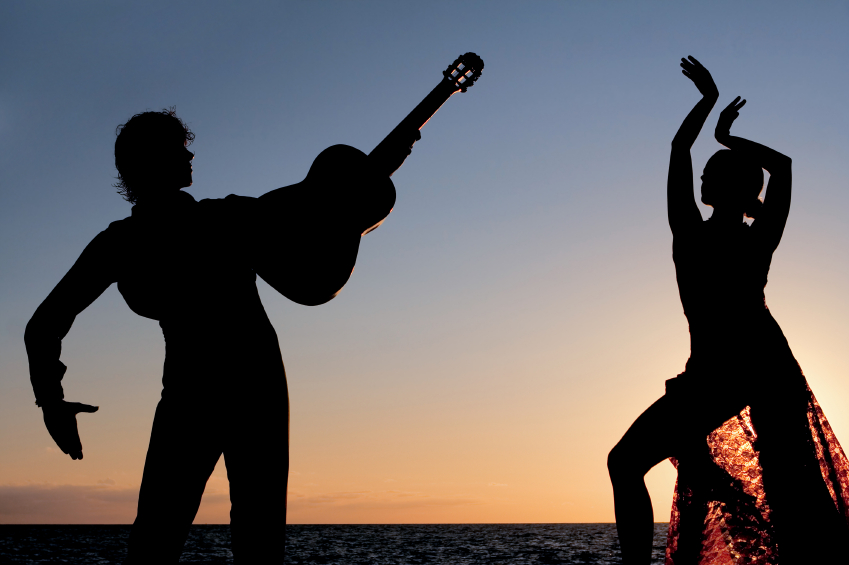