They swoop, swirl, swing, and step with apparent abandon that masks absolute control. Ballroom dancers are athletes with extraordinary musicality, larger-than-life stage presence, and an uncanny ability to slip from fierce to floating in a single beat. The best of them have always shared a particular talent: They are mesmerizing as they tell a new story with every dance.

The Castles were a pre-WWI ballroom dancing sensation. They performed all the partner dances and sought out new forms based on African dance and jazz. Their wholesome appearance, growing ballroom repertoire, and the "safety" of a married couple demonstrating all the latest partner dances helped to boost them to stardom. They danced to Irving Berlin's ragtime, became a staple on Broadway and in popular dance clubs, opened their own clubs, and starred in The Whirl of Life, a silent feature film based on their meteoric career. In 1915, British Vernon joined the RAF in World War I and was killed in a training accident in 1918. Irene, a celebrated style-setter, continued to perform in movies and on Broadway for another five years as an actor and in dance routines. 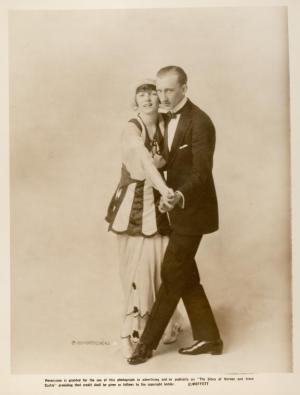 Astaire had a full dance card of gifted partners who were ballroom luminaries in their own right, but one of his most iconic and enduring partners was Ginger Rogers. Together they made nine memorable films, including Flying Down To Rio, The Gay Divorcee, Top Hat, and The Story Of Vernon & Irene Castle (who were strong influences on the young Astaire's style and career). All the films featured stand-out, crowd-pleasing dance numbers. Fred Astaire introduced classic songs from Cole Porter, Jerome Kern, Irving Berlin, and Ira and George Gershwin in his films. However, his smooth style, incorporation of dramatic and comedic elements, and quintessential grace in ballroom dancing outshone even his effective crooning and acting.

Many consider Ginger Rogers to have been Fred Astaire's best dancing partner. She had her own very successful acting career, but it was their dancing films that cemented her stardom and their legend as one of ballroom's greatest duos. Their partnering style combined foxtrot, waltz, tap, and jazz - sometimes in the same routine. It's true Rogers did everything Astaire did, backwards and in heels. Although he was the more talented dancer, she contributed attitude and acting skills to their collaborations, and together they were a ballroom dancing juggernaut in the 1930s and 1940s.

Donnie Burns, a Scottish ballroom dancer, was never defeated in any ballroom dance competition for 20 straight years, a feat which landed him in the Guinness Book of World Records. With his partner, Gaynor Fairweather, he accumulated fourteen World Professional Latin Dance championships and eleven International Latin American Dance championships - both records that remain untouched. Burns' effortless transitions from smooth and sinuous to staccato and sexy won him a worldwide roster of diehard fans. He and Fairweather took risks in their choreography that unfailingly eclipsed any other couple competing against them. After his competitive career ended, Burns made TV guest appearances on Dancing With the Stars and as a judge on Strictly Come Dancing. He remains active as a teacher and ballroom dance entrepreneur.

Gaynor Fairweather may well be the spiciest ballroom dancer ever to come out of the UK. Her legendary career partnering with Donnie Burns placed her at the pinnacle of Latin dance, and she remained fearlessly inventive in her interpretation of such staples as samba, rumba, and cha-cha-cha. Fairweather and Burns took their Latin choreography seriously - they even studied flamenco in Latin America in order to introduce the dance into their competition repertoire. Gaynor Fairweather ended her partnership with Burns when she married and began dancing with her husband, Italian ballroom dancer Mirko Saccani. She and Saccani currently live and teach dance in Hong Kong.

Pierre Dulaine was born in Palestine, fled to Jordan with his Irish father and Palestinian mother when the state of Israel was formed, moved as a teenager to the UK where he began dancing at age 14, and relocated to New York in 1972. By 1976, Dulaine, partnering with Yvonne Marceau, began winning his first of four World Championships. He and Marceau danced on Broadway in Tommy Tune's Grand Hotel for several years and opened the show in London's West End. But it is for his work teaching ballroom to disadvantaged kids that Dulaine wins countless accolades and was made the subject of a documentary and a movie. Mad Hot Ballroom tracks the award-winning hoofer as he establishes his legendary program, Dancing Classrooms, teaching ballroom to fifth graders in NYC public schools. Antonio Banderas starred in Take the Lead, a biopic about Dulaine's free life-changing program for kids. Dulaine's own company, American Ballroom Theater, has presented full-length performances at The Kennedy Center, The Brooklyn Academy of Music, Jacob's Pillow Dance Festival, The Joyce Theater, Saddler's Wells Theater, and many more prestigious worldwide dance venues.

The Champions were accomplished all-around dancers who specialized in Broadway and ballroom styles. Marge got her start as a dance model for Disney animations (her first role was Snow White) and Gower was a solo dancer and choreographer on Broadway. The two met and became dance partners just after World War II and found fame in musical films such as Showboat and Lovely to Look At (in which they perform a memorable ballroom dance number). The wider public encountered them as a dance team on variety shows in the early days of television - at one point they even had their own TV sitcom. Gower went on to direct and choreograph such blockbuster Broadway musicals as Bye Bye Birdie, Carnival!, Hello Dolly!, I Do! I Do!, and 42nd Street. After their divorce, Marge continued to work as a dancer, choreographer and teacher.

Vyacheslav "Slavik" Kryklyvyy is a Russian dancer, born in the Ukraine, who brought audiences worldwide to their feet with his interpretations of Latin dance. He is famous for his numerous partners, a peripatetic inclination that probably shortened his career. However, while he was actively competing, Kryklyvyy became a five-time U.S. Professional Latin Champion, a World and Blackpool Amateur Latin Champion, and a Silver Medalist at the both the World and Blackpool Professional Latin Championships. Kryklyvyy routinely shut down competitions with his electric collaboration with Karina Smirnoff, with whom he danced for five years. The pair also had feature roles in the Richard Gere-Jennifer Lopez film, Shall We Dance? Although they have not been official Latin dance partners since 2005, Kryklyvyy and Smirnoff occasionally pair up again for such events as ballroom dancing's live performances of World Champion dancers, Dance Legends.

Karina Smirnoff studied dance as a hyperactive child in the Ukraine but shifted her focus to academics as a teenager when her family emigrated to the U.S. While she was in Fordham University, preparing for law school, she resumed her ballroom dance lessons and changed career plans. Smirnoff began placing in Latin ballroom competitions and, when she partnered with Slavik Kryklyvyy, collected five U.S. Latin Ballroom Championships, an Asian Open Championship, and a World Trophy Championship. She went on to become a regular on Dancing With the Stars. After seven seasons on the show, Smirnoff traded her TV gig for Broadway in a ballroom dance show called Burn the Floor. She returned to Broadway in the music-and-dance celebration of Argentine tango, Forever Tango. Karina Smirnoff is known for her telegenic, smoldering sensuality and audacious choreography. She's one of those ballroom dancers who can land a new, heart-stopping move on every beat.

Maks is a perennial favorite on Dancing With the Stars, but a childhood skiing accident in the Ukraine nearly derailed his dancing permanently. After they inserted a metal rod in his thigh, doctors told Chmerkovskiy, who began dancing at age four, that he should find a new career goal. So he embarked on a rigorous rehab journey and never looked back. After his family emigrated to the U.S. when he was a teenager, Chmerkovskiy began competing, eventually ranking second in the U.S. and seventh in the world among professional International Latin couples with his partner, Elena Grinenko. But TV lured him from the competition circuit, and American audiences soon became fans as he appeared season after season on Dancing With the Stars. Chmerkovskiy has a concurrent Broadway career, partnering with such ballroom luminaries as Karien Smirnoff in Burn the Floor and Forever Tango. He is a respected choreographer with credits for Las Vegas reviews, the DWTS national tour, soft drink commercials, and music videos.

Ballroom dancing isn't that thing your grandparents do at family weddings -- not any more. It's a hotly competitive, high-stakes global performance industry that scoops up TV ratings, while it heats up the Broadway boards of old vaudeville stages. From the clean-cut careful breeziness of early partners like Irene and Vernon Castle to the sizzling dance numbers that shimmy and shake international competitions, ballroom has grown up, shedding most of its inhibitions. The best dancers, then and now, are the ones with that high-risk magic that entrances a star-struck audience, even as the performers make it look almost easy.