Irish step dance is a wonderful celebration of the arts and Ireland's unique culture. Since this performance dance became a part of pop culture with the success of Riverdance, it has captured the hearts and imaginations of many fans and aspiring dancers. Learn about the origins of the dance and then experience the joy of the genre by learning the steps yourself.

The Origins of Step Dance

Perhaps nothing is more easily identified as part of Irish culture than step dance. With its strength of rhythm and grace in execution, Irish immigrants brought the dance with them wherever they settled, including North America and Australia.

The cultural dance of Ireland started with the Celts and came along at the same time mainstream Christianity was introduced by Saint Patrick during the 5th century. Many written documentations of the dance steps themselves were destroyed during subsequent periods of political unrest, but the Celts' rich music and dance traditions continued to be passed down despite these challenges.

Returning to the politics of Ireland, perhaps one of the few reasons Irish step dance survived is thanks to an Anglo-Irish parliament that passed a law to establish that only native Irish were allowed to associate themselves with the unique traits and traditions of the nation. For this reason, dance was isolated as a special and cherished activity, and the Irish were still able to celebrate despite the dynamic climate of their government.

Soon schools of dance were erected all over the country, and teachers were paid well for their services. Step dancing even took on the form of a contest for the first time during the 1800s in which dancers competed for a cake prize. The local religious rulers often tried to ban dance from Ireland, but they were obviously unsuccessful as Irish dance continues to thrive today. 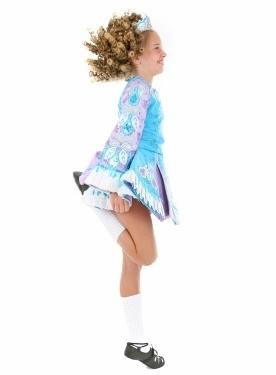 Rising up from its ancient roots, modern Irish step dance started shortly before the turn of the century. Step dance performances were moved to more sophisticated venues such as theatres or outdoor stages, and official competitions were formed. Today, Irish dancers are encouraged to utilize all space of a stage, while in prior centuries this was discouraged due to a lack of ample room to dance. Modern roomy performing arts venues have opened doors to difficult, more impressive looking steps, such as flying jumps.

The way dancers are trained has also changed. Many start out much younger than what was previously considered acceptable. A dance tradition that was once predominantly male is now almost exclusively female, including solo performances which were extremely rare until during and after the 1920s. The jovial dance scene is also more diverse, with top dancers of many ethnicities.

The style of dance itself has also evolved, as modern day Irish step dance involves stiff and precise movements. Before this development, many dancers were more relaxed and daringly carefree. Many Irish historians argue that the evolution into stiffer arms and legs came out of Catholic church demands as an attempt to maintain modesty.

Give Step Dancing a Try

When you learn about the rich history and many fun aspects of Irish step dancing, you're likely to want to take part in it yourself. Here are some steps that you can try to see if you may want to go further in your study of this lively dance. Unless otherwise noted, these steps are all performed with your arms at your sides.

Side Step in Jig

Back Step in Reel

An Irish reel is danced to upbeat music, and the legs move quickly. Keep in mind that a reel is all about your journey. Be sure to realize where you want to start and finish before you begin this part of the dance.

Click on the image below for a printable diagram that will help as you learn the back step in reel. This visual aid, in Adobe format, has an easy-to-follow breakdown of the moves. 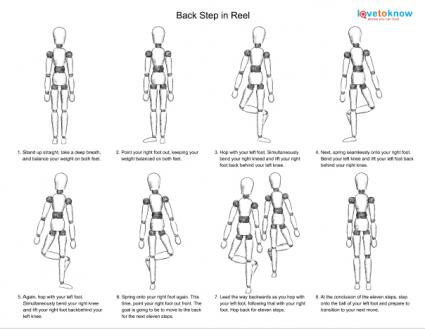 This is another easily recognizable step. It was popularized within the beloved Riverdance show. When performed this step looks complicated, but it's rather easy to learn. 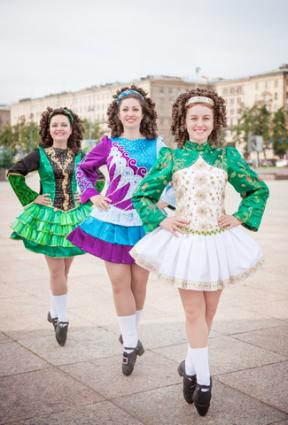 Step dance has long been recognized for its beautifully elaborate dance costumes. Many modern styles follow the traditional Irish colors of green and white, and embroidery has increased in intricacy. Many designs found on a step dancer's dress are derivative of Irish culture, such as Celtic crosses and other patterns symbolizing mankind and the afterlife.

Special hard shoes or two types of soft shoes are also worn, while early dancers were usually barefoot. Most of today's shoes involve an adapted tap on the toe and heel, providing an audience with distinctive clicking sounds that bring wonderfully rhythmic percussion to a dancer's movements.

An old Irish proverb says, "Dancing with the feet is one thing, but dancing with the heart is another." Irish step dance aims to bring together both parts of the dance. It is now performed internationally, and both children and adults participate in various competitions and ethnic festivals year after year. It continues to grow in popularity, making Irish step dance one of today's most desirable forms of movement.