The Joffrey Ballet has delighted audiences since its founding in 1956. Its classically trained dancers perform a repertoire of traditional ballet favorites and cutting-edge contemporary works. The company's official training ground is the Joffrey Ballet School in New York City. Besides preparing dancers for professional careers in ballet, it offers classes for children and beginning adults.

History of the Joffrey Ballet

Robert Joffrey founded the company in New York City when he was only 26. He was assisted by Gerald Arpino, who took over directing both the company and school after Joffrey's death in 1988. Financial woes followed, and Arpino decided to move the company to Chicago in 1995 while the school remained in New York.

Seattle native Robert Joffrey gave up a promising dance career to form the Joffrey Ballet, for which he choreographed, commissioned original works, and reconstructed ballet classics from the Diaghilev era. According to the company's website, he also was the first American director to present the buoyant work of Danish choreographer August Bournonville. Joffrey taught at dance festivals and served on numerous boards and councils. He received many awards in his lifetime, including an honorary Ph.D. from Pacific Lutheran University in Tacoma, Washington. In 2000, he was posthumously inducted into The National Museum of Dance.

Choreographer Gerald Arpino co-founded the Joffrey Ballet and was a leading dancer with the company in its early years. After choreographing his first piece in 1961, he became its resident choreographer. His works are in the repertoires of companies worldwide. Career highlights include choreographing the nation's first full-evening rock ballet, Billboards, to music by Prince; and being the first American commissioned to choreograph a ballet for a city (San Antonio). He is also the only choreographer to have had four ballets performed at the White House. Arpino also received many awards, including three honorary doctorates. He stepped down as artistic director of the company and school in 2007 and died the following year.

The current artistic director, Ashley Wheater, is an alum of the Royal Ballet School in England. He worked with such luminaries as Frederick Ashton, Kenneth MacMillan, and Michael Somes in performances at Covent Garden. Rudolf Nureyev advised him to join the London Festival Ballet, where Wheater danced in Nureyev's productions of Romeo and Juliet and Sleeping Beauty. He was named principal dancer there at age 20.

Wheater danced with the Australian Ballet for three years until Arpino invited him to join the Joffrey Ballet in 1985. He spent four years there before moving on to the San Francisco Ballet, where he remained as ballet master and then the artistic director's assistant after retiring from dancing in 1997. Wheater returned to the Joffrey in 2007, succeeding Arpino as artistic director of both the company and school. Chicago Sun-Times reporter Laura Molzahn wrote in 2016 that Wheater has "brought the Joffrey into the 21st century."

Currently, the company has 43 members, who hail from all over the U.S., as well as Mexico, Canada, Brazil, Colombia, Cuba, Russia, Armenia, France, and Spain.

While Joffrey was at the helm, the company built an outstanding reputation by performing a mixed repertoire of original ballets and rarer classics, such as Mikhail Fokine's Petrouchka, as well as others created for and performed by Serge Diaghilev's Ballet Russe de Monte Carlo. Arpino contributed more than one-third of the company's repertoire, including Viva Vivaldi!, Kettentanz, Sacred Grove on Mount Tamalpais, and Round of Angels.

Today, the Joffrey's eclectic repertoire includes works by legendary choreographers like George Balanchine, Lar Lubovitch, and Twyla Tharp, along with contemporary works by up-and-coming choreographers such as Annabelle Lopez Ochoa, Yuri Possokhov, and Christopher Wheeldon. Choreographer of An American in Paris currently on Broadway, Wheeldon created a new version of The Nutcracker for the Joffrey, which debuted in December 2016.

History of the Joffrey Ballet School

The school began in a converted chocolate factory in Greenwich Village in Lower Manhattan. In 1960, it moved to 434 Sixth Avenue, also in Greenwich Village, between Ninth and 10th streets. It occupies 10,000 square feet on the third and fourth floors of the building, which is a historic landmark.

Joffrey founded the school with Arpino in 1953. Their mission was to develop and train professional ballet dancers, since there were few professional ballet schools in the U.S. at that time. Robert Joffrey was the artistic director of both the school and the company until his death, when Arpino took over. While Wheater is now the school's artistic director, Karine Provost is the current academy director. The school currently has 31 faculty members.

Programs at the Ballet School

The Joffrey School offers a variety of classes for children, pre-professionals and adults. The children's program offers:

Adults with no prior ballet training can also take classes. There are open classes for intermediate adults and professionals.

The Junior Trainee Program is a six-day-per-week, afterschool program for students who intend to move toward a professional dance career and/or may be interested in colleges with a dance major. Students take the following classes:

There is also an eight-week summer intensive program that runs from June to August. The last four weeks are open only to those who will perform in the end-of-the-session show. 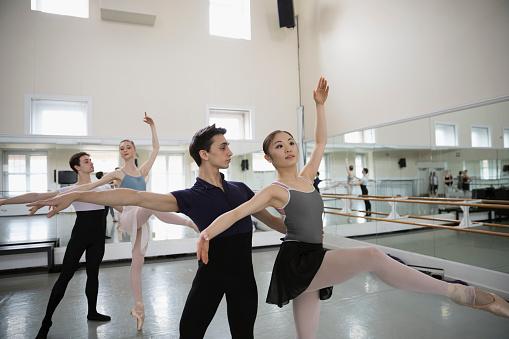 The school is an accredited member of the National Association of of Schools of Dance. It is also meets the standards set by the U.S. Department of Education for vocational training.

The Training Program is a four-year, post-secondary program. Upon completion of 3,450 hours done in no less than four but no more than six years, dancers are awarded a certificate. Students are expected to take at least 14 classes per week. Joffrey students do not receive grades, but are evaluated on a scale from unsatisfactory to excellent on every element of ballet technique at the end of each semester. Students may be placed on probation and dropped from the program if it is determined they are not making sufficient progress.

Admission to all training programs -- junior, pre-professional and summer intensive -- requires an audition. These can be in person at a touring audition site, or by online video submission. There is a $40 audition fee, whether it is done in person or online.

Robert Joffrey's legacy continues to grace the world of dance. His namesake school is a wonderful place to get exceptional training in ballet no matter what your level. In addition, he built an internationally known dance company with one of the world's most unique repertoires representing the best in classical and contemporary ballet.