With all the TV shows and movies showing smiling couples twisting and gyrating together, it's no wonder that there is a lot of interest in finding out how to learn rhythm dances. These dances have formed the basis for the American Rhythm Dance Competitions and many similar gatherings, as well as providing dance instructors around the world with students eager to learn.

With the exception of the East Coast Swing, all of the rhythm dances come from Latin American roots, and each has its own rich musical history to go along with the steps, whether intricate or simple. Coming from the communities of families and friends celebrating together, they are earthier and more grounded than more formal ballroom dances such as the International Tango.

The rhythm dances consist of the following:

There is no specific order in which to learn rhythm dances, and it is certainly possible to learn more than one at a time - the techniques of rhythmic movement, body control, and connection with a partner carry over from one dance to another.

Created in the 1960's by Walter Laird and his dance peers, the cha-cha has become one of the staples of international dance competitions in the Latin American category. Like all dances that have spread throughout the world, it has evolved and changed, with the International Style quite different from the American Style. A partnered ballroom dance, the cha-cha is very compact and suited to crowded spaces, with a low forward-and-back movement that has very little rise and fall between the partners. Counted in 4/4 time, the step actually begins on beat 2, which lends to the syncopated feeling of the dance.

Rumba came to America in a dance form known as son. A dance form full of sinuous hip motion and twisting steps, the name "rumba" proved to be more marketable, and the name became synonymous with exotic cabaret-style performances. It is not surprising that the steps are similar to the cha-cha, as rumba (especially in America) contributed to its creation. However, while the cha-cha has a specific kind of music associated with it, the rumba is adaptable to many musical forms that accommodate the slow-quick-quick rhythm.

The hybrid child of Eastern Swing Dance, Charleston, and the Lindy Hop, East Coast Swing is one of the strictest forms in terms of pattern count (always six, never anything else) but one of the most free in terms of form. The popular notion is that there is no "wrong" way to dance it, though the National Dance Council of America has standardized certain technical forms that enable competitors to move on a level playing field. Usually accompanied by a "big band," East Coast Swing has lots of flashy, gymnastic moves available to the partners.

Bolero is a unique form of ballroom dance combining the twisting forward and back motion of the rumba and cha-cha with the rhythmic up-and-down sweeps of the waltz and foxtrot. While it has a 4/4 rhythm like the other Latin dances, it is slower than any other, with a similar slow-quick-quick rhythm style.

Coming from Cuba, mambo is a dance created in the late 1940's to go along with the music of the same name. Rhythmically it is similar to the bolero, but with much more complex steps and the particular saxophone and brass heavy music. While it shares the slow-quick-quick rhythm of the Bolero and Rumba, it is more similar in count to the cha-cha, with the slow step crossing measures on beats 4 and 1. 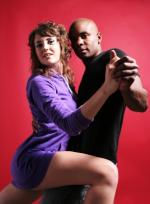 Where Can Beginners Learn Rhythm Dances?

As with most things, the internet is a great place to begin, perhaps with something like Free Ballroom Dance Instruction Videos. Other good places to start include the Love To Know Dance Page for a good general overview.

However, there is no substitute for hands-on experience. Watch movies such as Strictly Ballroom or Take the Lead for a modern perspective of the rhythm dance competitions, but you could also find some old Fred Astaire movies such as Royal Wedding. Versions of all of the dances are taught in studios, clubs, and social groups all over the world, and there is an active and vibrant community celebrating the rhythm dances together.