You hear the rhythm of loud finger clicking as the actors appear, followed by quick, insolent interjections of woodwinds and brass. Every snap, flick of the wrist, and audacious step is a declaration of bravado, arrogance, threat, and conflict. Welcome to West Side Story, where the movement tells the tale.

The choreographer-director emerged as an American theater specialty in the work of Jerome Robbins, his protégé Bob Fosse, and other dancer-dramatists who understood the powerful impact of dance on an audience. In West Side Story, Robbins broke with musical theater traditions to portray the unglamorous world of urban gangs with all the gravitas of the classic narratives about the privileged class. Shakespeare's Romeo and Juliet is the inspiration for the tragedy of Tony and Maria. However, Robbins took the simple conventions of the costume ball and the sword fight and transformed them into a glorious melee of jazzy, balletic explosions of dance to grab attention, ratchet up anxiety, and break hearts. A lifted shoulder, an outflung arm, or a stomping foot telegraph intent and action as well as any lyric or line in West Side Story. The choreography is a key reason the brilliant departure from conventional Broadway musicals endures and pops up everywhere from high school stages to Times Square flash mobs.

Robbins' acute observation and his mastery of ballet informed the style of each leap and gesture in West Side Story. Street gangs and gang warfare -- a very present reality in New York City at the time the show's creators envisioned it -- were rough, suggestive, crude, violent, and possessed of a distinctive swagger. The impoverished disenfranchised "locals," and the even more upstart recent immigrants, identified with a culture that rejected the more gentrified economic classes who rejected them. Every single move in West Side Story reflected that reality.

Ballet gave the choreography grace; jazz and genius gave it personality. Robbins used big, whole-body moves, rapid and abrupt gestures, long leaps that exploded from the cracked asphalt, emphasis on the downbeats of the music to portray young, aggressive, volatile male energy in the Jets and the Sharks. He shaped female character with more sinuous and suggestive action: swishing skirts, flamenco foot-stamping, balletic steps to convey romance, and open arms and chest to reveal heart. The style of West Side Story relies on fiery dynamics, belligerent staccato, syncopation, exaggerated extensions -- particularly high leg lifts -- and the lyrical moves of the lovers and the bereaved. Robbins succeeded so brilliantly in fusing ballet and jazz that his Symphonic Dances, adapted for the New York City Ballet almost verbatim from the WSS choreography, is a staple of the company's repertory. 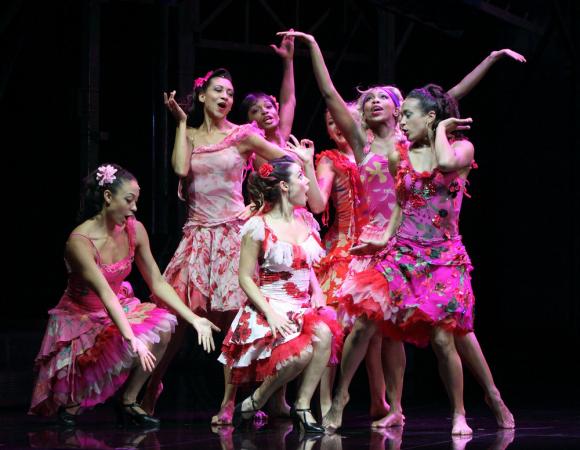 Notice how often the characters in the show start out walking. Those walks - sauntering, swaggering, stealthy - establish the mood and scene and quickly morph into choreography that propels the narrative. Robbins was an exacting and exhausting taskmaster. He exhorted his dancers, all highly trained professionals in the classic arts, to stroll or step across the stage like tough young hoods and segue into the dancing. He rehearsed and reviewed each dance endlessly, running so far over budget when the Broadway show was made into the award-winning movie that he was fired from the film. (A revealing anecdote relates how the blistered and bruised dancers burned their kneepads outside Robbins' office after he finally approved a take of Cool for the film.)

The individual dances edge dialog and acting aside to tell the tale. As Mambo pivots into Cha-Cha at the gym, the fateful dance sequence entwines the destinies of Tony and Maria together far more tightly than Juliet's lament: "My only love sprung from my only hate! Too early seen unknown, and known too late!" ever could. Cool is bottled-up dynamite, as the Jets caution each other to contain the rage and hostility that will erupt into bloodshed and continue an ancient feud. Capulets and Montagues have nothing on the Jets and Sharks, and those 20th-century hoodlums' relatable hopes and dreams are wordlessly expressed with the sharp angles and contractions of the bodies on stage.

A World Wild and Bright

Just watch the dances and you "read" the story. The opening sequence - no real dialog at all - sets up the cultural conditions that are the daily reality of two gangs with a blood feud that defies logic but encapsulates an era. In America, the saucy, sexy movement interplay between the Puerto Rican men and women mocks the hostile world they are in, the uninhabitable world they came from, and the powerful seductions that will unite them romantically and tragically as the story unfolds. The dance at the gym is controlled violence, a stand-in for the murderous melee to follow. Tension builds as the dancing becomes more disturbing and intense - the attempted rape sequence was shocking to the audiences in 1957 and remains abundantly recognizable today. There are no wasted steps and no wasted words in West Side Story. Take away the choreography, and you have a concept, an idea, but never the flesh-and-blood unforgettable adventure that struts and frets [its] hour upon the stage - and sweeps up generations of theater-goers in its relentless dance.