Inspired by a highly successful British TV series, Dancing With the Stars has grown into a worldwide phenomenon that shows no signs of stopping. Each season crowns a winning star and his or her professional dance partner.

Past Winners of Dancing With the Stars

Winners of Dancing With the Stars take home the coveted Mirror Ball Trophy. To date, the winners of the competition include the following couples.

Viewers were instantly smitten with Bindi Irwin, daughter of the late Steve Irwin. Bindi is a television personality and conservationist in Australia, and her energy and work ethic made her an early favorite in this competition. She is now tied for the youngest winner on the show at age 17 (Shawn Johnson shares the title), and her partner Derek Hough has increased his win total to six.

Singer and actress Rumer Willis, who is also the daughter of Hollywood A-listers Bruce Willis and Demi Moore, beat out eleven other celebrities to win Dancing With the Stars' 20th season. Her professional partner, Valetin Chmerkovskiy, is the younger brother of DTWS pro-dancer Maksim Chmerkovskiy.

Alfonso Ribeiro proved that he could dance better than his Fresh Prince of Bel Air alter-ego, Carlton, when he won the 19th season of DWTS with pro partner Witney Carson. In fact, Ribeiro is an accomplished dancer in his own right - not only did he perform on Broadway as a child, but he also co-starred with Michael Jackson in a Pepsi commercial.

Professional ice skater and ice dancer Meryl Davis bagged the mirror ball trophy in season 18. Her skating partner Charlie White was also a cast member, setting up an even more competitive season. Davis holds the record for the highest celebrity average score across all of her performances: an impressive 28.4 out of 30.

Amber Riley, best known for her role as Mercedes Jones on Glee, partnered with the highly successful Derek Hough to snag the season 17 win. With five perfect scores and only one score throughout the entire season under an 8/10, Riley easily beat out fellow finalists Corbin Bleu and Jack Osborne.

Kellie may only have finished 6th on season five of American Idol, but she and partner Derek Hough beat out the competition and took home the mirror ball trophy. This was Hough's fourth championship, giving him the most wins in the show's history thus far. 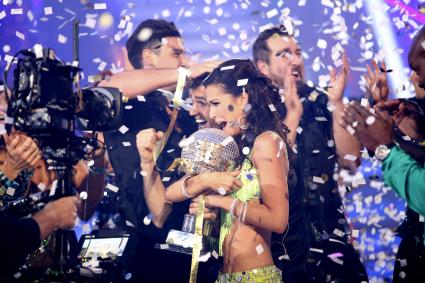 Former Dallas Cowboys cheerleader and Bachelor star Melissa Rycroft got a second chance at the coveted mirror ball when she joined the season 15 All-Stars cast. Competition was stiff, but Rycroft and her partner Tony Dovolani found themselves pitted against former winners from seasons 1 and 8 in the finals. The judges found Melissa's dancing delightful, but it just might have been long-time fans of the show who voted nice-guy Tony Dovolani over the top to give the couple their spot in mirror ball history.

Green Bay Packer Donald Driver may have started the season second from the bottom, but he peaked right at the perfect time. All three of the final couples pulled triple tens from the judges, but Driver and partner Peta Murgatroyd's Cha Cha carried them to victory.

J.R. Martinez is one of DWTS' most inspiring contestants. He was a cast member of the now defunct soap opera All My Children, but he's also an Iraq war veteran who suffered burns over 40 percent of his body. Trailing fellow competitors Rob Kardashian and Cheryl Burke in the judges' votes by just one point in the finals, J.R.'s indomitable spirit and dancing talent won over the viewers' votes and carried him and partner Karina Smirnoff to victory.

NFL players always seem to fare well on DWTS, and Ward, of Pittsburg Steelers fame, was no exception. No stranger to a perfect score, Hines and partner Kym Johnson scored a perfect 30 for their free-style dance. Their Quickstep earned 29 out of 30 points to bring home the win.

Jennifer Grey first charmed audiences with her dance skills in Dirty Dancing with Patrick Swayze. Age 50 at the time of her win, she was the oldest star to take home the mirror ball to date. However, winning did not come easily, even though the couple was consistently at or near the top of the leader board throughout the competition. Grey had to overcome physical disabilities, including a neck injury, to claim her spot in DWTS history.

Nicole Scherzinger was best known as singer for The Pussycat Dolls before her stint on DWTS, and she was recognized as a real contender for the trophy from her first dance with Hough. The couple earned high scores throughout the season, ultimately claiming the title for season ten.

Donny Osmond has been enchanting audiences since childhood as part of The Osmonds. Paired with Kym Johnson, the couple's Argentine Tango was praised as "poetry in motion" by Carrie-Ann Inaba, and the couple's free-style dance in the finals earned them a perfect score and, ultimately, the mirror ball trophy.

Shawn Johnson is a seasoned gymnast who's no stranger to physical movement and athletic precision. She also has a touch of grace to go along with the talent. This winner of the eighth season of the show wowed judges, earning top scores on Latin dances such as the Argentine Tango, the Cha Cha, and the Paso Doble.

Brooke Burke is a television personality who quickly rose to the top of the seventh season of the show. She earned, with her partner Derek Hough, several perfect scores and blew the competition out of the water almost from the first episode of the season.

Figure skater Kristi Yamaguchi earned the sixth season's top prize and holds an additional honor that no other celebrity dancer on the show has yet earned - achieving a perfect score of 30 in all three of her dances going in to a finale of the show.

This dance couple earned several perfect scores during their partnership on the show. Their most successful dances were those with quick and energetic choreography, such as the Quickstep, the Cha Cha, and the Foxtrot.

Ohno and Hough earned several perfect scores, most notably for their Samba and Paso Doble. An audience favorite, it is sometimes thought that this couple was destined to win season 4 right from the start.

Emmitt Smith is perhaps better known for his days in the spotlight playing for the Dallas Cowboys, but as the third celebrity winner, his dancing also deserves a great deal of credit. Earning top scores for Mambo and Samba, Smith sure looked like he was having a lot of fun while dancing on the show.

A singer for the band 98 Degrees, Lachey proved during the second season of DWTS that his dancing skills are every bit as good as his singing skills. Lachey and his partner Cheryl Burke came in first place for a majority of the weeks during season 2 of the show.

Monaco is a well-known model and actress, perhaps best known for her roles on Baywatch and General Hospital and appearing in Playboy and Maxim magazines. Her dancing talents proved to be equal to her acting and modeling talents as she went on to become the first ever winner of Dancing with the Stars.

Regardless of who wins each season, Dancing with the Stars remains an excellent example of the arts and popular culture coming together in a positive way. It will be exciting to see which stars sign up for future seasons, as well as which couples go on to join the ranks of the winners.

Comments
© 2006-2021 LoveToKnow, Corp., except where otherwise noted. All Rights Reserved.
Who Won Dancing With the Stars