Merengue dance steps are quite popular among social dancers, and they can be very fun and simple to learn. From basic moves to more flashy choreography, the Merengue will catch the eyes of everyone on the dance floor wherever it is performed.

The Merengue had a tough introduction into the world of dance. Even though it is now a popular social dance style, for a long time it had a stigma because of the African beat in its music. It was considered improper to dance to such music, and some Merengue dances included music with risqué lyrics, causing even further concern and judgments against the dance style. Finally, the Merengue became popular in the Dominican Republican thanks to its music, and it eventually became the official dance of the Dominican Republic.

The Merengue is often considered to be the simplest social dance form to learn, and almost all steps are done with a partner. The intimacy and close holds of the Merengue make it a sensual dance that brings passion to its performance when danced correctly.

Like most social dance styles, Merengue dance steps are danced in precise time with the music. The music used for the Merengue is a four beat music bar, which means that there are four beats to each measure of music, meaning four movements to each measure. A typical Merengue step is two bars of music. Thus, when dancing the Merengue, each basic step takes approximately eight counts. The male partner is always the leader of this couples dance, and the female mirrors his movements right from the start.

The side basic step starts with the man's weight on the right side of his body. Stepping onto his left foot, the left foot drags inward and shifts weight back to the left leg so that the right leg is free to step down on the second beat. The weight continues to drag and shift from side to side for the remaining counts of the eight-step measure. The female dancer mirrors the male, starting with her weight on her left leg and alternating throughout.

The Basic Step can also be used to go forward and backward. For the Forward Basic Step, you simply move forward instead of sideways, again shifting your weight back and forth to maintain fluid rhythm with the music. The Backward Basic Step is again the same concept, but this time you travel backward instead. The lead steps backward on his left foot first, with the female mirroring. It is important to master both the Forward and Backward, because when partners mirrors each other, one will obviously be going forward while the other backward, and vice versa. 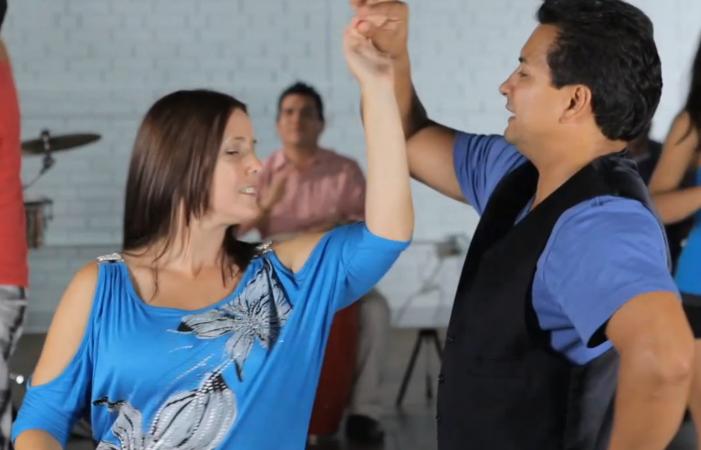 The Merengue gets its complexity not from its steps, but from the style and flair added to the performance. The turns are responsible for some of this classic Merengue style. Most turns are performed by using the side basic. A single hand turn allows the leader to guide the female under one of his arms, while both partners continue dancing the side basic. A double hold will allow the partners to hold both hands and turn opposite each other to return to their original position in time for the next step.

When performed correctly, Cuban hip movement adds considerably to a Merengue performance. This is a natural movement that occurs, but it can be stylized to be more intense and noticeable, depending on the theme and mood of the dance. The sensuality of the Merengue is clearly present right from the first bars of music, as partners exude a certain chemistry onstage very much associated with the movements.

While the Merengue steps themselves are quite simple, the emotion and theatrical components of the dance are impressively complex. Once you are comfortable with the basic Merengue dance steps explained above, feel free to add your own creative expression to the choreography.